The American Legion Band of Greater Kansas City has an 90+ year tradition of offering public concerts and performing at public and patriotic events throughout Missouri and Kansas. The Band was formed shortly after the close of World War I and has previously been known as the “Official Band of the Liberty Memorial,” “Harry Truman’s Band,” and the “American Legion National Championship Senior Band.”

Since 1951, the Band has competed in every annual American Legion Senior Band Competition and is the only ensemble to do so, most recently earning the title of National Champion in 2016 in the National American Legion Convention in Cincinnati.

The Band performs annually at the Liberty Memorial, the Harry S. Truman Presidential Library, and to commemorate Memorial Day, Flag Day, Independence Day, and Veterans’ Day. The Band has also performed at various patriotic and civic functions, such as Old Shawnee Days and the Korean War Memorial dedication in Overland Park. The Band is a Missouri-nonprofit corporation and a 501(c)(3) organization. 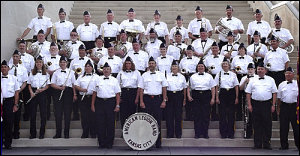