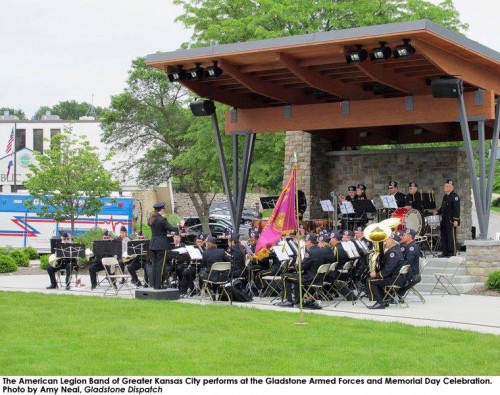 The American Legion Band would like to sincerely thank Cynthia Horn for her work in compiling the extended version of the Press Release that was recently provided to area news organizations.

Additional thanks to Lee Kavanaugh, reporter for the Kansas City Star, for observing the band during rehearsals and Memorial Day performance in preparation for the June 1 feature article.

“Bill, the post commander, myself as Public Relations for the Legion, Clyde Rayburn, President and Jim Gillingham the Financial Officer for the American Legion Band of Kansas City met to discuss Post 21 becoming the home post for the Band.  What an honor to have the American Legion Marching and Full Concert Band at Post 21. The American Legion Band is the only marching and full concert band in the state of Missouri.  You will hear more about the band in the future and our work together. The band participates in competitions throughout the city and will be performing at the post throughout the year.  I will keep you posted when they are performing as you won’t want to miss the performance of this fantastic band.”