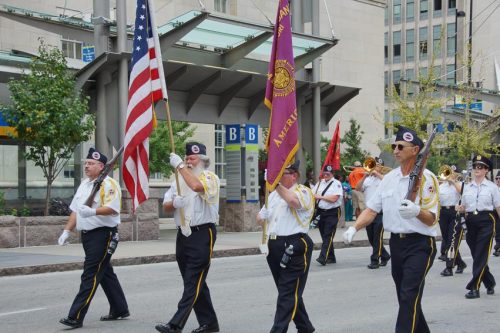 Color guards and marching bands have been an important part of American history. In early history, flags were used for a number of purposes. A detachment of soldiers was usually assigned to protect the flag. As history moved forward, color guards were used to lead marching bands, drum and bugle corps and other types of marching units. The Legion is dedicated to upholding proper protocol, point of honor and due and proper respect for our National Colors in all ceremonial situations. — excerpt from the 2015 Color Guard and Concert Band Competition Rules, www.legion.org

The Color Guard of the American Legion Band of Greater Kansas City provides ceremonial posting and retrieval of the colors for nearly all events at which the band performs. The Color Guard is also available for events on its own when the band or one of its ensembles is not performing.

The Color Guard uses Springfield military rifles in its routine. These are actual firearms, but they are not loaded, and the Color Guard does not carry ammunition. If your event would disallow having these rifles present, we can use artificial sidearms instead. Please let us know if there are any considerations to having the rifles at a performance.