In the forties and fifties the uniform was the standard Legion uniform, black with a yellow strip on the legs and cuffs of the coat. The hat was standard, trimmed in yellow and had a white plume.

New uniforms were purchased in the early sixties.  The pants had a red stripe.  In addition to the coat, an overlay of white and red was used.  The hat was tall with a white plume. The overlays were very hot, hard to keep clean and difficult to handle.  This uniform was worn until 1972 at which time new hats  were purchased, and overlays were discarded  The coats and pants remained the same. 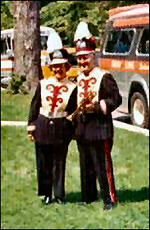 The present uniform was purchased new in 2005 and features the standard Legion style of dark navy pants with yellow stripe, white military style short-sleeved uniform shirt, dark navy jacket with yellow stripe on the cuffs, and  standard Legion cap. Jacket, shirt and cap all have the embroidered band emblem on the left sleeve or side.  These uniforms feature machine washable fabrics for the pants and shirt.