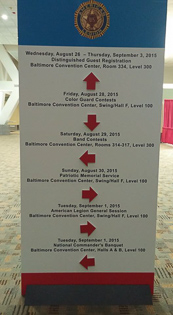 The band traveled to Baltimore for this year’s Convention and is preparing to compete in the 97th National Convention Concert Band Competition. The Band Contest begins at 1 pm Eastern Time and will be live-streamed free of charge. Please click through to hear the American Legion Band of Greater Kansas City in its 65th consecutive appearance at the National Convention – the longest tenure of any American Legion Band.

This year’s selections include